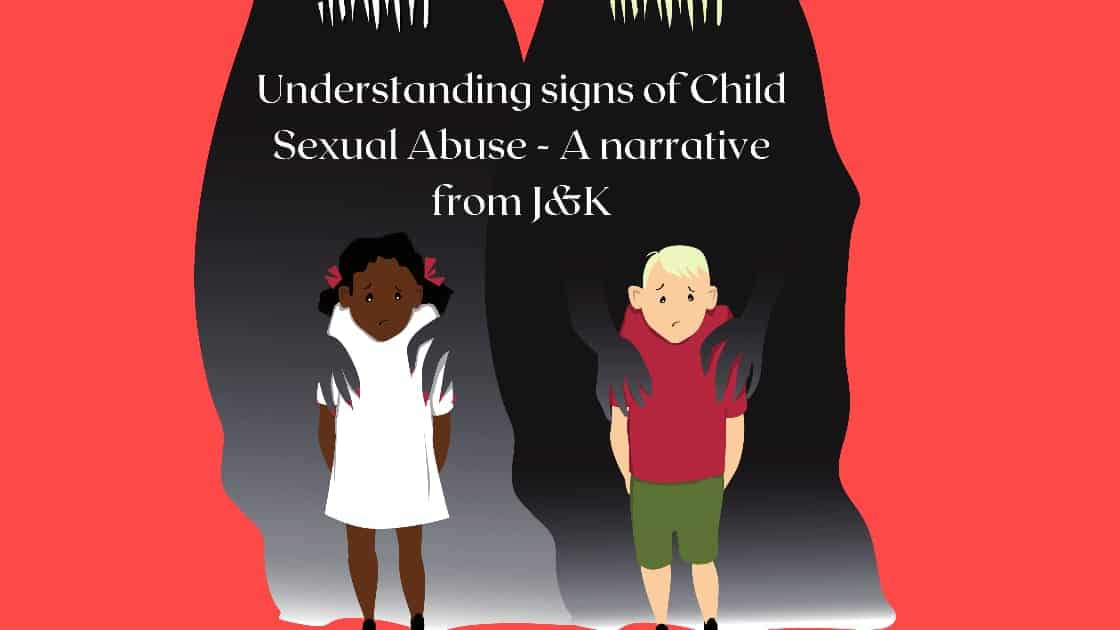 By Zahida Ahanger of SKY TRUST KASHMIR- Zahida is a welfare worker by choice who hails from small town Pattan of Kashmir and her passion is to work for marginalized section of society. Email- ahangerzoya121@gmail.com

Child Sexual Abuse also referred as Child Molestation is an abusive sexual behavior upon a child. It is a form of abuse in which an adult or older adolescent uses a child for sexual stimulation or satisfaction. Child sexual abuse encompasses sexual assault, rape, verbal sexual abuse and many types of sexually abusive acts towards children.

According to the US Centers for Disease Control and Prevention (CDC), Child Sexual Abuse is “any completed or attempted (non-completed) sexual act, sexual contact with, or exploitation (I.e. noncontact sexual interaction) of a child by a caregiver”.

Our experiences play a big role in shaping our health and well being throughout our lives. Physical and sexual abuse can have long term, detrimental effects on children. A child cannot consent to any form of sexual activity. When a perpetrator engages with a child this way, they are committing a crime that can have lasting effects on the victim for years.Child sexual abuse can affect the psychological and physical well-being, family and intimate relationships, faith, and education and career. The victim can have damaging impact on the ability to form and maintain close, loving relationships. It can affect the relationship that victim and survivors have at the time of sexual abuse and for the rest of their lives.

“When I talk about it, I feel like hell, I feel I am dirty, when I close my eyes I can see everything clearly and it hurts me from inside. I was not able to share the incident with family, I had no courage to share with anyone. I don’t know after me how many children became his victim”. (A victim narrated her story to the author)

The most recent data from the world health organization have shown, up to one billion children aged 02 years to 17 years globally have experienced physical or emotional violence or neglected in the year to June 2020.

A common misperception about child sexual abuse is that it is rare event perpetrated against girl child by older males. To the contrary Child Sexual Abuse is much common occurrence that results in harm to millions of children, boys and girls alike, in all communities, and across a range of cultures and socio economic backgrounds. These acts perpetrated by both men and women. Offender can be a stranger, trusted friend, a family member, a relative and people of all sexual orientations.

Child Sexual Abuse cases are registered in Kashmir region also. Although, barriers to reporting of child sexual abuse cases in the rest of India, particularly against person in a position of authority known to the child are also endemic in Kashmir.

According to data shared by district child welfare committees, 343 cases of child sexual abuse were reported in J&K between January and November 2020. The union territory Kashmir has seen a spike in reporting of child sexual abuse cases in the years since J&K enacted its own protection of children from sexual violenceAct in December 2018, after a furor following the gang rape, torture and murder of a 08 year old girl in kathua, Jammu in January 2018. The child protection service scheme is aimed at providing a secure, protective environment for vulnerable children, including those in situations of abuse. Reporting suspected child sexual abuse is everyone’s responsibility. Section 19 of the Protection of children from Sexual Offences (POCSO) Act makes it mandatory for any person, including the child victim to report an offence under the act, failure to report is a punishable offence except for the child victim.

However by gaining insight into the ways abusers think parents and caregivers can learn to be more vigilant in protecting their children. Few behavioral signs in abusers are:

What are the warning signs?

Behavioral signs are: changes in hygiene, develop phobias, self-harms, shrinks away or seems threatened by physical contact, runs away from school or home.

Be careful and slow in choosing the people you allow into your family circle. We can also reduce the risk by reducing opportunity. If you child is left alone with an adult, try to arrange for someone to drop in unexpectedly from time to time.

Parent children relation plays an important role in growth and development of a child. A child should feel free sharing his/her personal things to parents.

Start conversations about safety with kids when they are young. Teach young children they need to talk abouttheir bodies and information about boundaries to help them understand what is inappropriate.If your kid comes to you with something they feel important, take the time to listen. Give them attention, let them know you take their concerns seriously. They may be more likely to come to you in the future if they know their voice will be heard. Teach children following things:

Awareness programs at all levels must be organized to aware people about Child Sexual Abuse, Its Impacts and Precautionary measures. We all are equally responsible. We must send a message across the world that there is no disgrace in being a survivor of sexual violence. The shame is on the perpetrator.  When it comes to sexual Abuse, we must teach our children that it is never too late to tell.